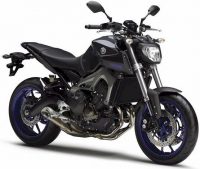 Featuring Yamaha’s brand-new 850cc transverse three-cylinder Crossplane engine, it is not only the new technology that is exciting but the fact that, after a recession-driven hiatus, the motorcycle industry is on the move again. BMW launched the semi-watercooled R1200GS, KTM introduced the mighty 1190, and Suzuki, Indian, Victory and others have new machines in the making.  END_OF_DOCUMENT_TOKEN_TO_BE_REPLACED

The Yamaha XT1200Z Super Ténéré ruffled some feathers when it was launched in 2010. The big, full-featured adventure bike immediately won an ardent following and can now be seen on the most challenging routes around the world.

The big Yam is, however, a little on the heavy side for technical riding. Weighing in at 538lbs (244kg) dry, the brute can be a handful in tight twisty uphills – although it’s 110 horses willingly pull the 575lbs (261kg) wet weight (plus rider and pillion) with ease. But that output and weight gives it a power-to-weight ratio less than it’s main competitors: END_OF_DOCUMENT_TOKEN_TO_BE_REPLACED