END_OF_DOCUMENT_TOKEN_TO_BE_REPLACED

Looking at pictures and videos, it’s hard to tell the difference. The T100 looks every bit as good as the T120. END_OF_DOCUMENT_TOKEN_TO_BE_REPLACED 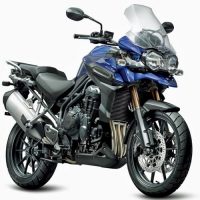 You don’t call this the new kid on the block. This is a giant. And it’s here to prove it, taking on the likes of BMW R1200GS, Yamaha Super Tenere and Moto Guzzi Stelvio. Obviously, they won’t take it lying down. Meaning the big-bore adventure fight is set!

Bring on the open road, check the pre-load, set your seat height, swing the engine, kick it into gear, turn the ear! The new 1200 Triumph Tiger Explorer looked ready even before you hit the start button. END_OF_DOCUMENT_TOKEN_TO_BE_REPLACED