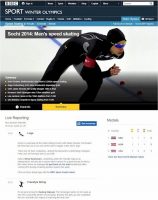 Coverage of the Winter Olympics is better than ever. The latest technology development in television broadcasting and online live reporting by the newspapers brings the latest results literally to your fingertips.

Television broadcasts now have more camera angles, crisper viewing and instant playback. And if you can’t watch the Winter Olympics live on TV from where you are, you can still keep an eye on not only the results but on the actual events as they are reported live by most of the major newspapers.  END_OF_DOCUMENT_TOKEN_TO_BE_REPLACED

Half of newspapers is rubbish and half is good stuff. Which half is rubbish and which is good is entirely up to your perspective. Or, perhaps, as Shakespeare said, “Nothing is wrong until you think it is.”

Finding either half in newspapers archives is easy thanks to the Google Newspaper Archive Search. Very handy. Features newspapers published as way back as 1790. Pretty awesome.

Not that you would be saving a tree when you switch to online news only; producing the electricity required to run computers and other electronic devices put paid to that. Fortunately, however, these devices are getting evermore energy efficient. And ever more efficient also are the new newspapers. The internet versions of newspapers such as The Wall Street Journal and Financial Times have finally embraced the new media format properly and have come to play, quickly catching up with and surpassing popular blogs – even the much admired Huffington Post and Talking Points Memo – in style and quality. END_OF_DOCUMENT_TOKEN_TO_BE_REPLACED