50 is a big number but the 2016 Super Bowl just couldn’t match its magic. The game was lame and the halftime show was the worst in Super Bowl history.

So, thank goodness for those $5 million TV ads. And though none of them brought the house down – most were rather lame compared to previous years – they did bring interesting statistics to light, in particular the use of second screen usage.

Second screen, as you know, refers to the use of a smartphone or tablet to look up information about what is being shown on TV at that moment.

The most popular ad according to the USA Today Ad Meter was Hyundai’s “First Date.”

The Unruly Viral Video Chart gave the honour of most-shared Super Bowl 50 ad to Doritos “Ultrasound” (with the Hyundai ad in 6th place).

But, to reiterate the state of Super Bowl as entertainment, Unruly hit the nail on the head:

Which brings us to the second screen usage.

Second screen usage, according to MoEngage and others was up by a fair amount this year. In fact, according to Think With Google, searches for brand commercials was up by 40% over the previous year.

The increase in second usage most likely is simply because of the rise in the number of people using smartphones to surf the web. But it could be that the poor event contributed to the distraction.

Anyhow, so, what was the most searched for Super Bowl 50 TV ad on second screens? 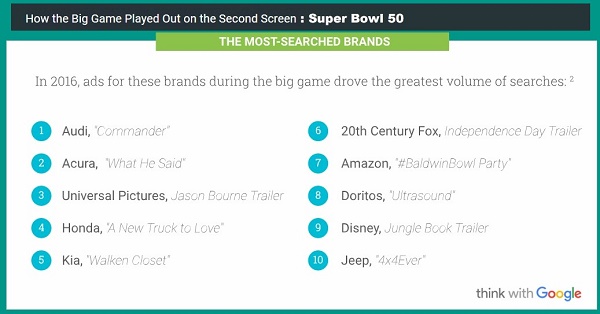 Answer: Audi “Commander” with Nic D’Avirro as the commander, Gunner Wright as the young commander and featuring David Bowie’s Starman as soundtrack.

This (rather excellent) ad was written by Rus Chao and Paul Venablesis of Venables Bell & Partners and directed by MJZ‘s Craig Gillespie.

But this was an event in which the final score is yet to be settled. The anti-police, anti-white rhetoric by the Black Panther-attired Beyonce and entourage during and after the halftime show and, in particular, the response in the media and social media after the game made Super Bowl the loser. It is always sad when a sports event is politicized. The controversy drew a tremendous amount of response and, this being an election year, probably did more harm than good to the intended cause. The winner most likely will be white consciousness.