Coverage of the Winter Olympics is better than ever. The latest technology development in television broadcasting and online live reporting by the newspapers brings the latest results literally to your fingertips.

Television broadcasts now have more camera angles, crisper viewing and instant playback. And if you can’t watch the Winter Olympics live on TV from where you are, you can still keep an eye on not only the results but on the actual events as they are reported live by most of the major newspapers.

Most of the leading TV stations and newspapers also have desktop and mobile apps specifically for following the Winter Olympics. Their journalists are doing an excellent job at minute-by-minute reporting and tweeting.

The BBC journalists, for instance, are also quick at uploading stunning action pics and at providing interesting factoids on the spot. See the BBC Winter Olympics Live Reporting. 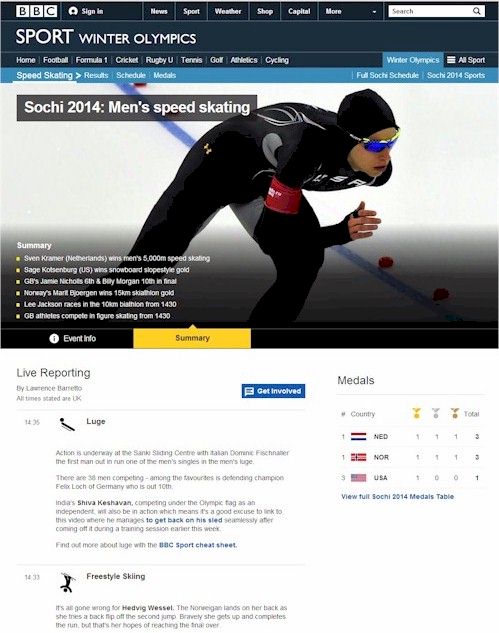 Considering their vast resources, the tech savvy Google obviously also covers the Winter Olympics live. In fact, they doing a rather job at it too, keeping it – in typical Google style – minimalistic yet complete. Simply google “sochi 2014 winter olympics” and all the latest results come up neatly at the top, with easy links to individual events and athletes. 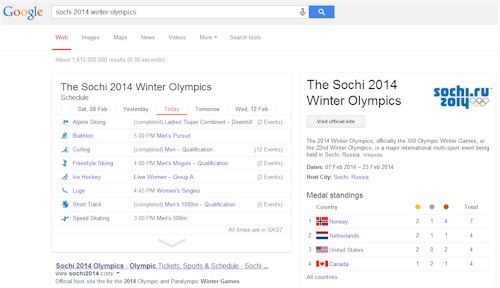 Twitter and “live reporting” is synonymous. It’s pretty easy to follow on a mobile device. And real fun.