FIFA would like you to call it “the world’s most beautiful game” but soccer is marred with corruption, childish ear biting, hooliganism and even war.

Back in 1996 when England fell to Germany in a UEFA Euro game, riots broke out in Trafalgar Square. In 2007, four Bulgarian men bit off part of a Greek man’s ear after Greece’s 4-1 loss to Turkey in a European Championship qualifier.

In 2012 in Port Said, Egypt, 74 people died and thousands were injured when soccer hooligans stormed on to the field after an unexpected 3-1 win by the home team Al-Masry against the country’s top club, Al-Ahly. 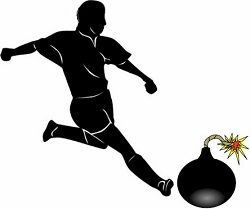 Not only do soccer hooligans turn on each other, they also attack players and referees. Sadly, there also are many instances of frustrated, drunk fans turning on their spouses after a game.

The silly antics are not the domain of the fans only. The often-overpaid, under-performing soccer players have their share in on-field scandals. Recently Liverpool player Luis Suarez bit Chelsea defender Branislav Ivanovic. In 2010, he was suspended for 7 matches with an incident while playing for Dutch club Ajax.

To churn your stomach even more, see the Duke University Soccer Politics article.

Wars were fought for strange reasons – but none as bizarre as the one that led to the 4 days long skirmish between El Salvador and Honduras in July 14, 1969.

The former lost to the latter in a play-off game for the 1970 World Cup. El Salvador fans then proceeded to beat up their Honduran counterparts.  Soon, the two countries were engaged in a full-blown war, known ever since as the Soccer War. It left 3000 dead, 6000 wounded and more than $50 million in damages. It led to the election of Colonel Sanchez Hernandez as president of El Salvador a year later.

But this was merely the latest manifestation of constant friction between the two neighboring polities. Their international border was never undisputedly demarcated. Honduras was the destination country for 300,000 impoverished El Salvadoran immigrants. Hondurans long campaigned to have them expelled. In 1968, thousands of them were. Honduran and Salvadoran businesses bitterly competed in the same markets. The Soccer War merely epitomized this deep-set rivalry.