Cats and women seem to have so much in common. Cats walk on their toes. A cat will spend nearly 30% of her life grooming herself. Once in your house, everything that’s yours also belongs to the cat. Felinity and femininity are deeply intertwined.

To confirm – and this is quoting from Way of Cats:

Then there are the cats who are demanding and imperious and seem impossible to please; except for those occasions when they break down and admit just how important and wonderful we are.

Furthermore, a cat will almost never meow at another cat. Cats use this sound for their mothers and their human care-givers. Isn’t that a little like a woman whimpering (or whining)? 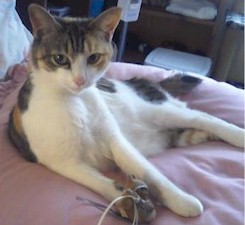 Cheeky the cheeky cat – from Venus

Good news from PerfectPaws is that “cats seem to prefer non-confrontation. If a confrontation does occur, it is usually a noisy ritual of aggressive displays, rather than actual tooth and nail combat.” What a relieve!

Which perhaps explains why people who own pets – such as cats – live longer, have less stress, and have fewer heart attacks. It is also true that “men who have marital partners live longer than men without spouses” and are happier, healthier and wealthier.

“Cats are affectionate and love to be touched, but only on their own terms.” Sounds familiar? You would know that if you can’t feel your cat’s ribs, she’s too heavy. But DO NOT tell her that… even if she asks!

A cat purrs between 25 and 150 Hertz. There is some research that proves that they will adapt the range of their purr to influence their care-giver – possibly to get more treats. Hmm, point made.